My initial idea for the world is that we are in the future where the majority of the surface of the planet is flooded and civilization has been slowly creeping up mountains and elevated spots of the Earth where the water has not *yet* reached. There was something very eerie about not only having the uncharted depths of the ocean underneath you, but entire cities hidden under the surface of the sea. People are forced to these small pockets of lands and there's not much left of modern comforts but people do want and need someone to retrieve food, valuables and useful materials from the sunken cities below. That's where you come in, diver! But you're gonna need a place to buy and sell things you find.

Okay so let me unpack this chaos a little bit. My fast handwriting is somehow more legible than my proper one, oh boy. 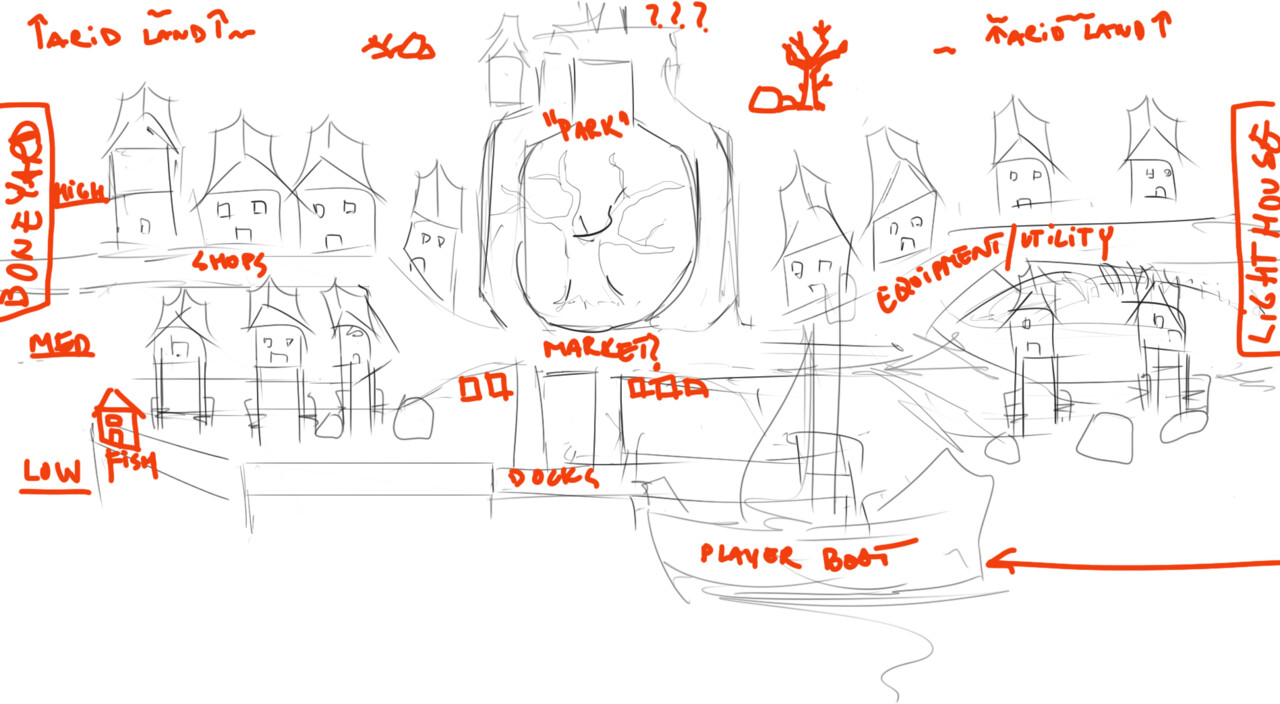 So this dumpy map is essentially a little blueprint for the structure of the place where the player can sell stuff, get quests, interact with others and generally look at all the remnants of civilization and the little that is left of the life as we once knew it and try not to have an existential meltdown.

Anyway, I've tried to look at how other games have done this hub town structure and apply it in my own map. This includes:

I initially thought to have the whale bones sort of in the middle of the town on the right but I ended up making that specific part accessible from the left side of the map as a separate area. It just felt right! I've also realized that, while it's fun to make, it certainly will take a lot of time to finish this hub town since I ended up making the player sprite, and as a result, the environment, much bigger than my initial 32x32 pixel sprite. Oops... I feel like it's right, though. It's more work but it feels like a good amount of detail when I paint.

Here's a part of the boneyard. I like making some rough shapes with a big brush and erase it down to something closer to what I was imagining. In the blocking phase it certainly doesn't need to be detailed at all, like making the grass on the bones was too much:

But I figured the winding skeleton would be a nice way to organically block off the rest of the area, like I mentioned above.

I'll keep working on this Big Boi Boneyard and I'll probably throw in some new character animating since it would be nice to walk around here. I'll keep you guys updated!

Now I just realized the tiny bone at the end that's half-buried kinda looks like a tiny head. Maybe it is? Maybe the player has a tiny head inside the helmet? Find out in the demo.

Have a great weekend!